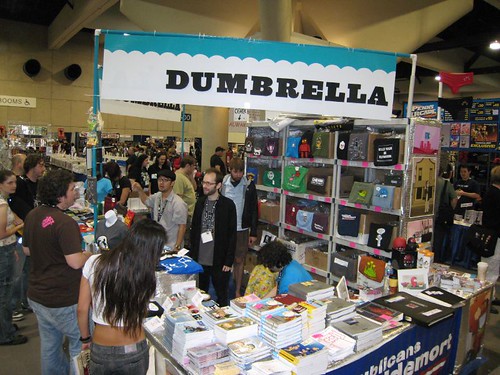 The Con was a lot of work, but a big success this year. After 6 years we're finally getting our shit together! The first 50 Black Lotus Kanser toys were a big hit, so hot that someone even stole the table display model! That's ok, it had a wonky paint job and I wasn't going to sell it anyway. The other 150 black and a few hundred greys will be available in a week or two at regular retail, so don't go blowing a wad on ebay.

Check out some great photos from Cloudy,  dBort and Tallahassee.
Also if you'd like to witness the con from the point of view of a small, stationary USB web cam, check out the 548 pics from our Booth Feed.

Many many thanks for all the help to Ferocious J, D Bort, The Good Rosenberg, Tallahassee and Granulac! After a relaxing day of drinking our post-con sorrows away with Phillip, Sam and I hopped on a train to LA to get ready for our next show. Great train ride, nice views and totally worth the $14 business class upgrade.

The opening went well, thanks to everyone who made it out to Burbank and a big thanks to the Wax Poetic staff for being so helpful and friendly. Sam put some pictures of the work from the show up on explodingdog, we'll get some better non-glarey images of the artwork up at some point I promise. Don't miss the pills page! There are a couple of shots from the opening over here.

Along with the large one-off framed prints, we have smaller 13"x19" prints and several 5"x5" box sets available, some t-shirts and things too. Call the gallery for pricing and info.

Ahh yes, my poor blog. Well things have been busy here, but there isn't much I can show off or talk about. Perhaps you will find a recap of my day stimulating (and link filled)!

I stopped by MyPlasticHeart to chat with Vin, pick up some promo postcards for Attack of the Zliks and talk about a few show details. We also just got a shipment of 18x24 posters in and they came out well, they will be available at the show and online. It's shaping up to be a great show, all of the ZLIKS I've seen so far are really amazingly well done.

I swung by the new Whole Foods market on the LES to get some lunch. That place is humungous. It is literally a city block worth of Whole Foods. I got lost in the cheese section for a while and texted Vin to alert a rescue team. Luckily the nice German Sausage Man arrived and pointed the way. Five hours later I managed to find an exit, I left somewhat in awe, somewhat confused, and somewhat smelling of gouda.

Then I met up with Sam Brown of explodingdog to hash out some ideas for a project we are working on together. I also got to see something that he's been working on, and it is very cool and funny, but thats all I can really say. I'm sure he'll tell people about it eventually... Oh wait, it's Sam, no he won't.

Finally it was off to Canal Plastics Center to buy.. wait for it.. plastic. I needed a few bits for my custom 'Bode Broad'.

Then I got home to do some 'real work'. I sketched a monkey, it was cute, but I thought I'd post the sketch you see here instead. Sometimes I draw things that are far too horrible to ever post on the site. This is like the tubgirl of creatures, honestly I'm ashamed. Don't look at me like that, Johnny.

And so the work shall continue until 3am, as usual!


P.S. A high five and devil horns to my friend Jon who does a little comic called Goats.. which he has been doing for 10 years now. If Goats were single malt scotch, it'd be almost old enough to drink!
Collapse